Chirp spread spectrum has been used in military and space communication for decades due to the long communication distances that can be achieved and robustness to interference.

LoRa is the first low cost solution open to the public.

Low–Power, Wide-Area Networks (LPWAN) are projected to support a major portion of the billions of devices forecasted for the Internet of Things (IoT). LoRaWAN™ is designed from the bottom up to optimize LPWANs for battery lifetime, capacity, range, and cost. 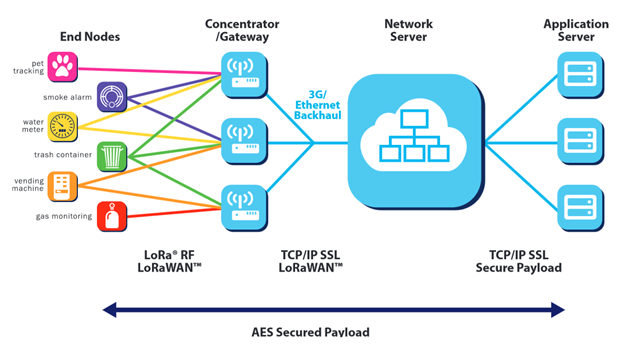 In a LoRaWAN™ network nodes are not associated with a specific gateway. Instead, data transmitted by a node is typically received by multiple gateways. Each gateway will forward the received packet from the end-node to the cloud-based network server via some backhaul (either cellular, Ethernet, satellite, or Wi-Fi). The intelligence and complexity is pushed to the network server, which manages the network and will filter redundant received packets, perform security checks, schedule acknowledgments through the optimal gateway, and perform adaptive data rate, etc.

It is extremely important for any LPWAN to incorporate security. LoRaWAN™ uses two layers of security: one for the network and one for the application.